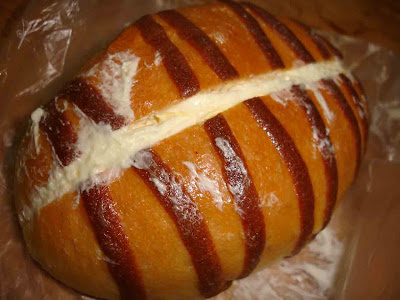 I'm not really sure why it's called Kick-Kick but if I were to use my imagination, I would say that Kick is synonymous with Cake.

My family loves the bread and pastry from Breadtalk although we don't usually try new creations. We prefer the baguettes, chocolate dome, raisin loaf, pudding, pork floss, mister bean, naan, and pizza. But during our last visit to the SM Megamall branch, daughter said she wanted to taste something different. She chose Kick-Kick because of the chocolate and cream. And it's yummy-- you won't even complain of the P29 price. This is best served if frozen. Alas, it's all gone before we were even out of the mall.