By Edel San June 24, 2013
I've been meaning to change my phone since last year but I haven't found the one that makes my heart beat. You see, I've been using a very old model of Corby. Actually, I fell in love with the phone thanks to a koreanovela- hahaha.

So last month, daughter and I checked the phone units at Sun Cellular because I've been a loyal subscriber and I am entitled to a free phone. However, the free phones doesn't excite me that much then daughter suggested this qwerty-type of phone. I was told its subject for approval and I need to wait for their call. Okay, I'm not really in a hurry. So it took me several more weeks until I remembered the phone and visited the nearest Sun Cellular branch. Hay naku, the one that daughter and I have been eyeing were not available anymore. I was told to choose between an Alcatel and My Phone. And the colors on the brochure are all black so its not that appealing. I said I'll just think about it. The lady who's been assisting me said to get the Alcatel since its a newly released model. Thanks but I'll think about it. She said the only available color they have are black. :P

I went around the mall, then ate at Sbarro. I should've taken photos of what I ordered but it just tasted so sad. Btw, I'm referring to the VMall Branch.

Then I called up my daughter and asked her about the OS ICS or JB. She said that JB is newer than ICS. She's an expert! And she's only 12.

So I went back and told the guy at the customer service counter that I'm getting the phone. He asked me to fill up a new form, etc., etc. I mentioned that it would be nice if the phone I'm getting is white instead of black. He politely listened to my monologues. Hahaha. And lucky me because he went back to the stock room twice. And when he came out the second time, he was holding a box with a white unit inside. Yey!!!

And now I'm a proud owner of this beautiful Soleil baby :) 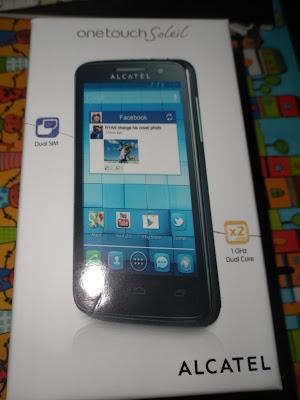 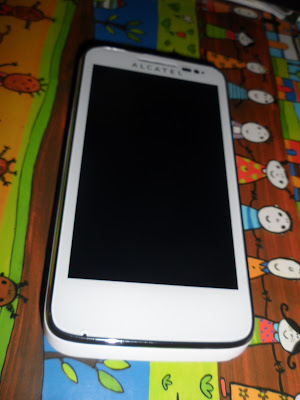