By Edel San June 01, 2019
Going to Bangkok is not complete if you haven't tried their famous Thai Milk Tea which are sold on the streets for 20 baht. It's not really hard to find a milk tea seller because there always seem to be one nearby. 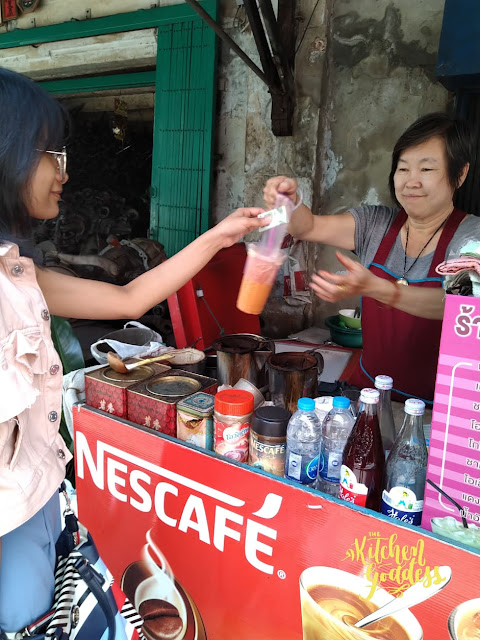 Actually, aside from milk tea you can also get Milo, coffee, or Nestea; just be specific on what you want to order because some aunties or uncles doesn't speak English. We were almost given Nestea iced tea because my daughter said iced tea but what she really meant was- iced Thai milk tea. 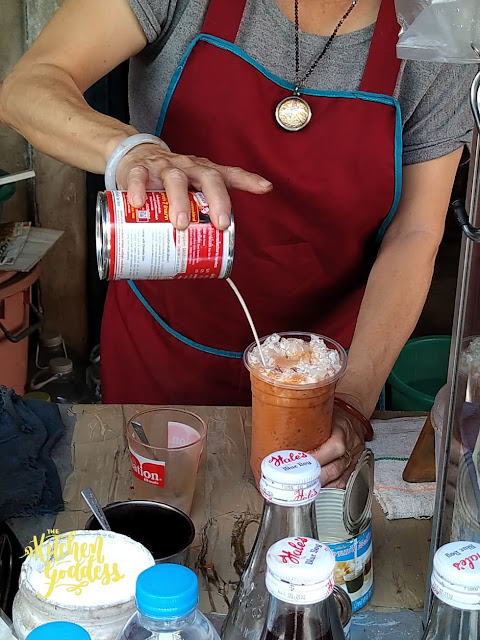 During our recent trip to Bangkok, my boba-crazed daughter had her fill of not just Thai milk tea but Taiwanese milk tea as well. If Manila has a mushrooming growth of milk tea places that serves brown sugar variant, Bangkok has those as well. I am sharing here my Bangkok Milk Tea Guide.

Neo Cha. This was an early morning discovery in the subway. We were on our way to Asoke Pier but decided to eat a quick breakfast at the Gourmet Market and saw Neo Cha. Ordered the Brown Sugar Milk Tea and it's quite good, not too sweet and the tea tastes perfectly brewed. Cost 29 baht. 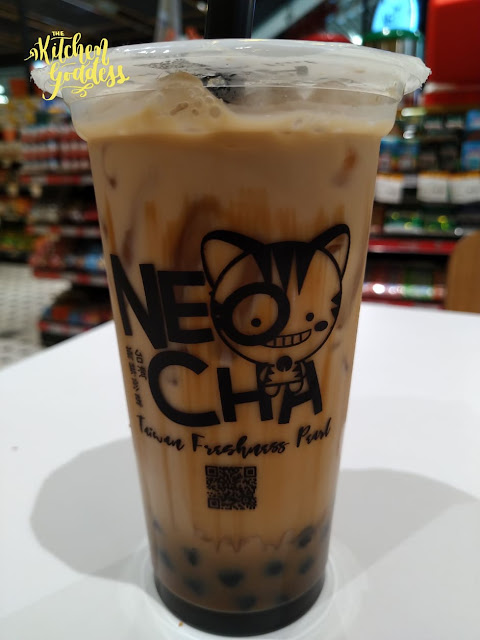 The Alley is one of the most famous milk tea chain to conquer Asia. It hails from Taiwan and has since then gained loyal boba-lovers that it soon began opening branches in Hong Kong, Singapore, Vietnam, Thailand, Philippines, and soon to open in Cambodia. I also read somewhere that it will open in NYC! What's surprising is that it is also popular in China, Japan, Australia, France, and California. We haven't tried the one here in Manila (located in SM MOA) yet since it just opened a few days before our trip so we're quite happy to see a branch at Siam Center and of course, we know we have to try it. No long lines, yey for us! 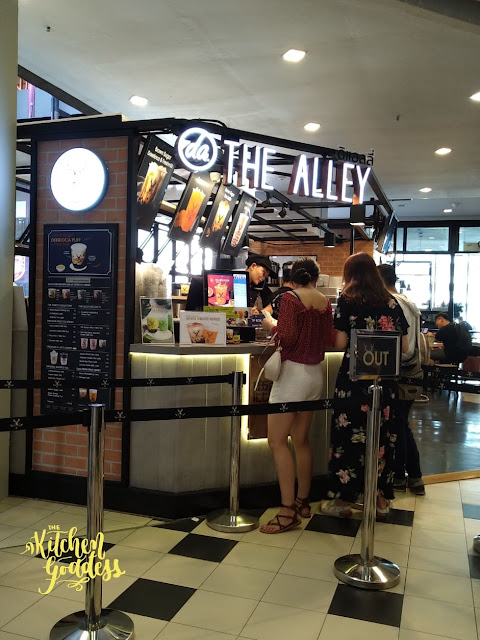 Daughter got The Alley Brown Sugar Milk Deerioca. This is a milk-based drink. I can't say it's love-at-first-sip since I was expecting some caffeine flavor so I can't compare this with milk tea. But its good in a kiddie-kind-of-taste. 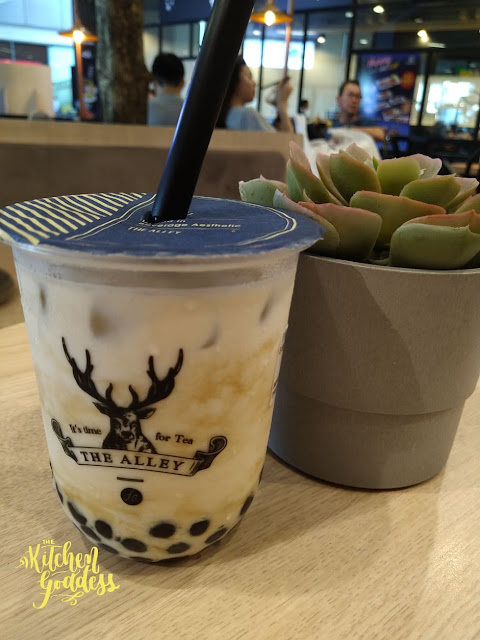 Going around Siam Center, we espied our favorite KOI which has a long line of customers. We first had KOI Brown Sugar Milk Tea in Kuala Lumpur and then in Singapore and we love it. 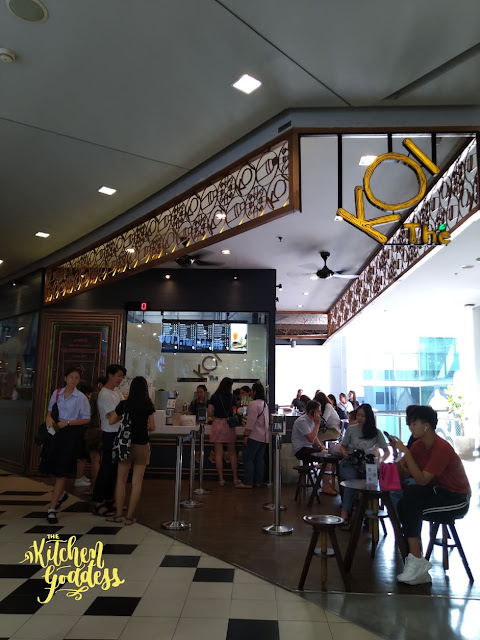 Another familiar boba-chain in Siam Center is Coco. There are two branches of Coco in this mall, one is located at the basement level while this one is near the BTS exit. We love ordering the Panda drink from Coco here in Manila. 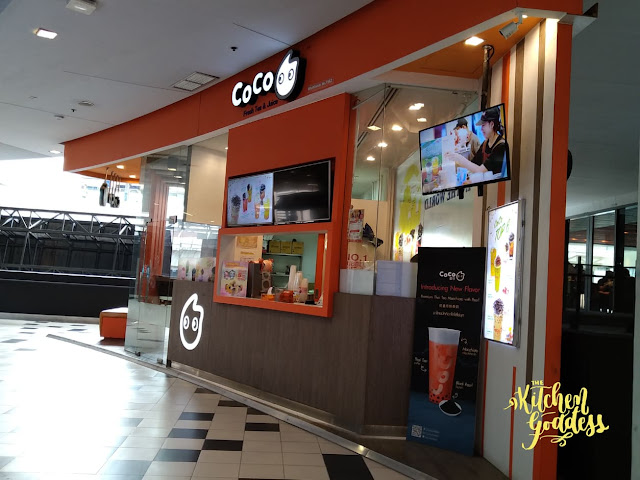 Here is another milk tea discovery after our touristy day at the Grand Palace. It was almost four in the afternoon and very hot. Since we took the Chao Phraya ferry going to the Grand Palace, we passed by some restaurants at the Riverside Mall and saw Hotto Bun food truck. We decided to go back to order milk tea. 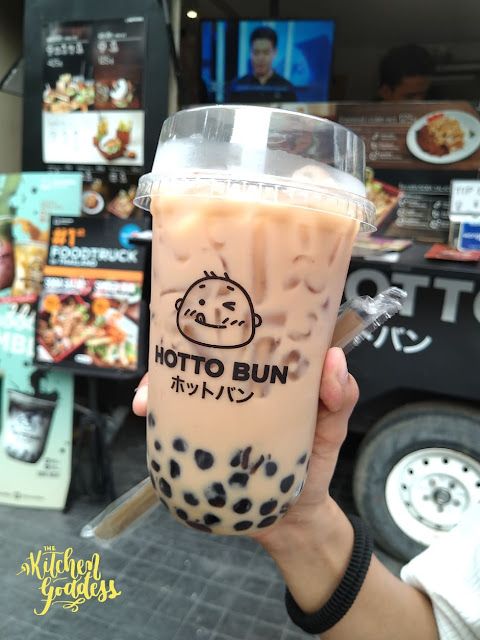 Although Hotto Bun serves Taiwanese food, I don't think it hails from Taiwan. They just happen to have boba drinks available on the menu. 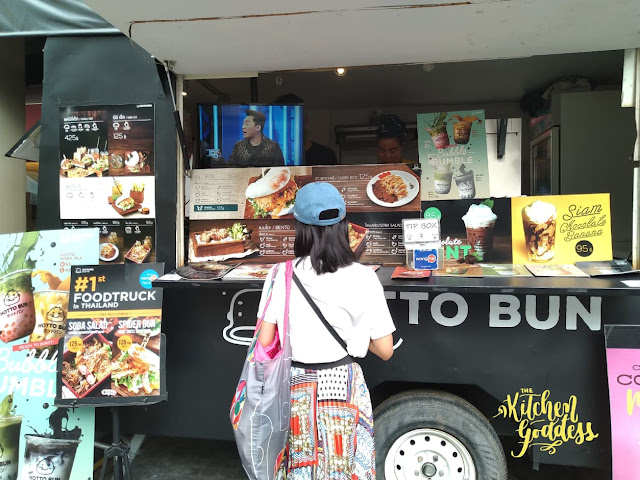 The Brown Sugar Milk Tea from Pablo (yes, the cheese tart) tops my list of boba discovery. We weren't really interested to order (another) milk tea since we just had lunch at the food hall of EmQuartier but saw this stall which was just several steps away from Harrods. 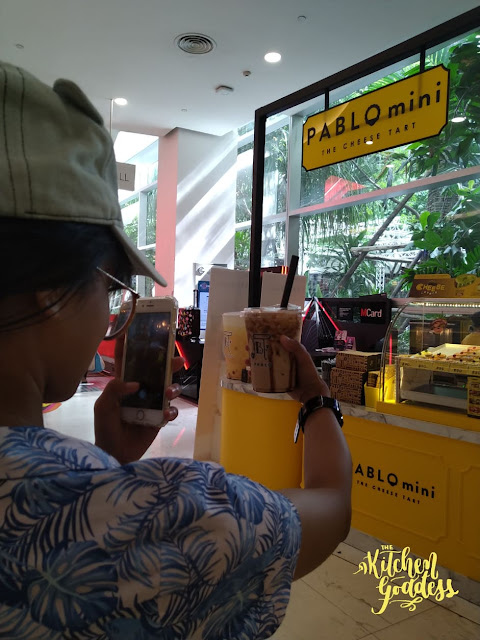 Can't help but fall in-love with Pablo's Brown Sugar Milk Tea drink. I love that the tea and sugar compliments each other well without having that too sweet or too tea-tasting moment. 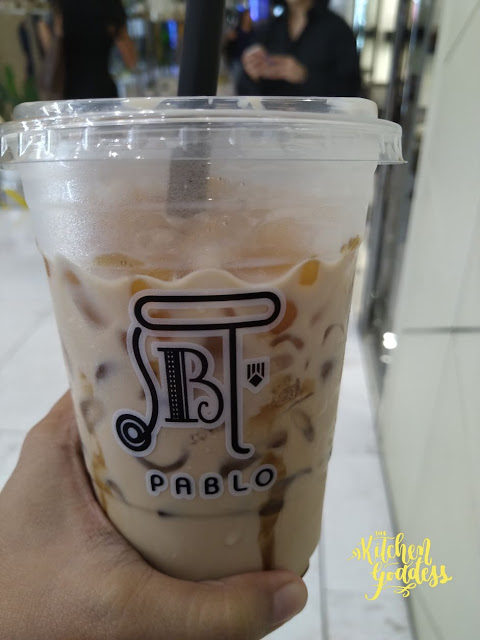 This is me, drinking (not a milk tea) Godiva's Dark Choco Raspberry Chocolixir. OMG it was so delish! Bitter chocolate with the faintest hint of sweetness and fruity tart raspberry. 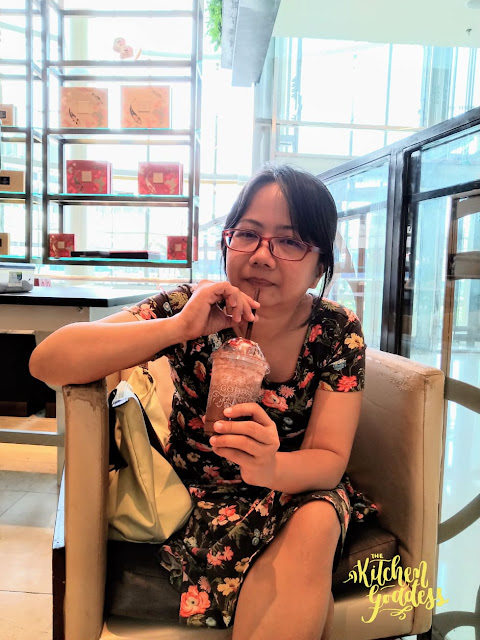 We ordered the Dark Chocolate Raspberry and Caramel Chocolixir from Godiva in Paragon Mall. Must try drinks that cost only 99 baht. I mean, 99 baht for Godiva is actually cheap if you compare it with the prices from Singapore and Kuala Lumpur. And the drinks really created a happy memory so we had another round, this time at Isetan Mall Godiva and got Mint Chocolixir. 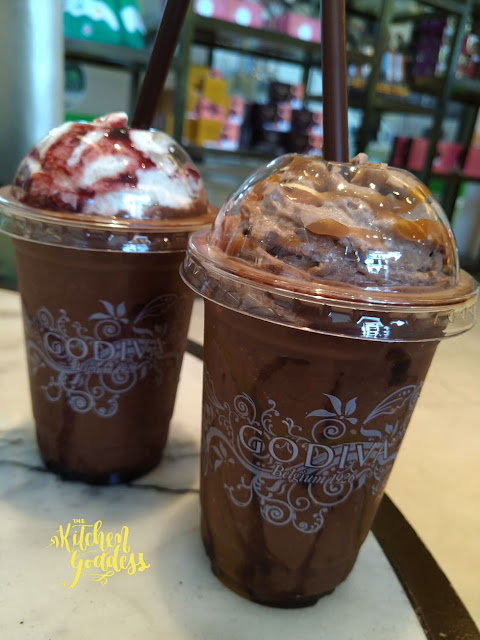 My daughter was really bent on having her fill of bobas during our one week stay but I got curious with KFC's Matcha Brown Sugar drink which cost only 35 baht. 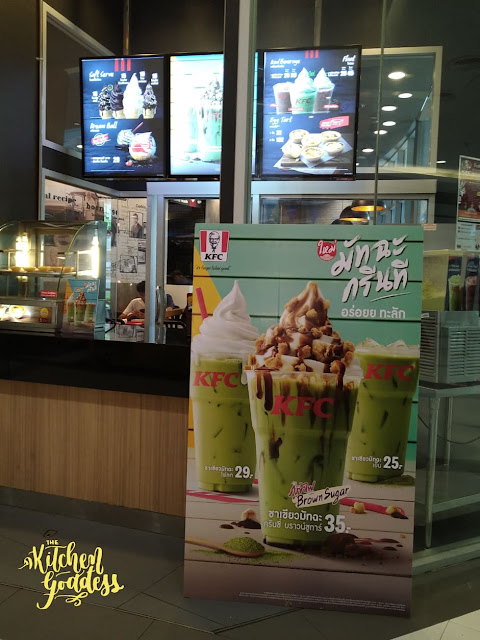 I'd say this drink is almost at par with Tsujiri's matcha drinks except that our glass seem to have been filled with 70% ice than the drink itself. But it was really good and creamy with cookie bits. 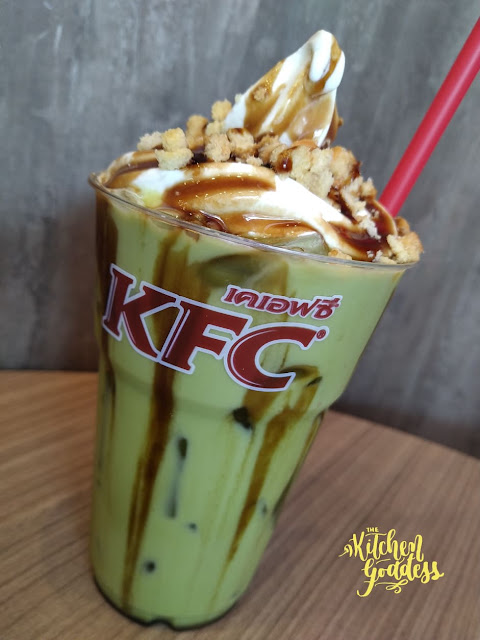 Here are some of the other interesting brown sugar creations available in Bangkok. 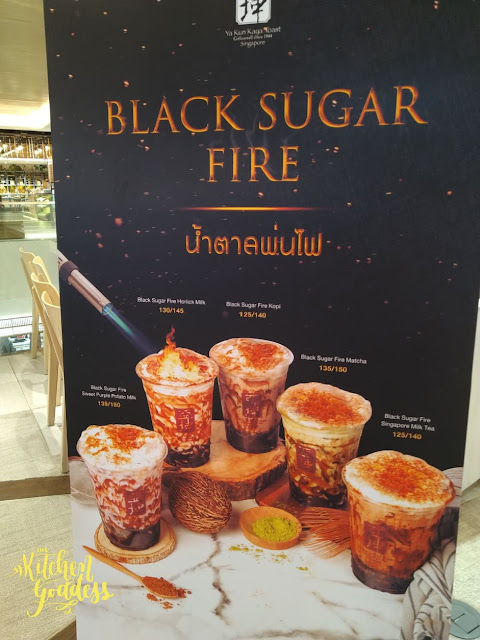 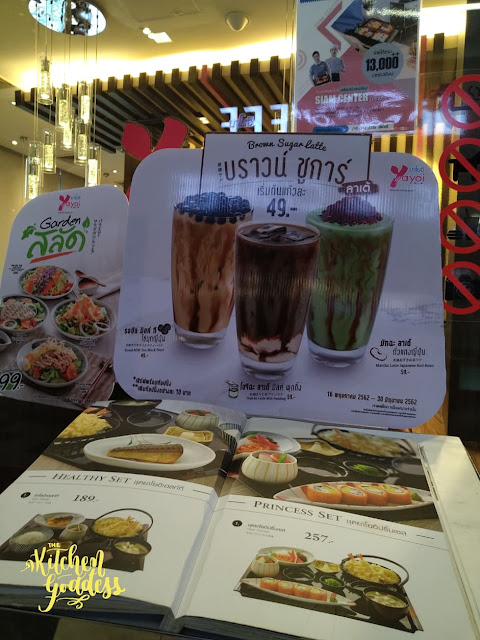 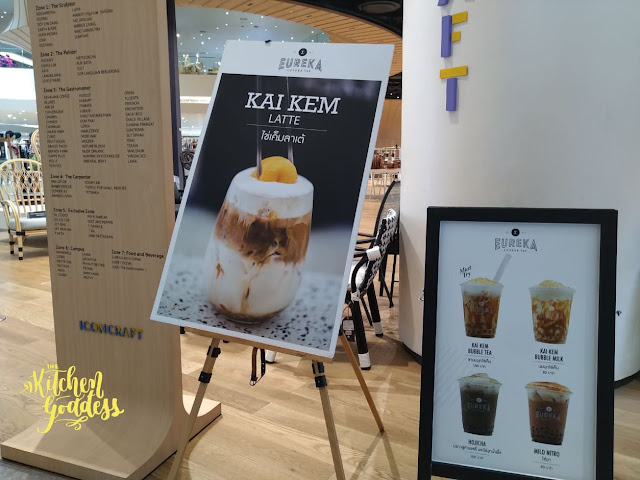 And if The Alley is popular now here in Manila, Seoulcial Club's The Crown (Brown Sugar Milk Tea) is quite popular in Bangkok. Huge lines at the IconSiam branch and at Central World.

I've learned about Seoulcial Club when I met my Thai blogger friends. We agreed to meet at the IconSiam branch which is just near our hotel (you just need to cross Chao Phraya river via the free IconSiam ferry). 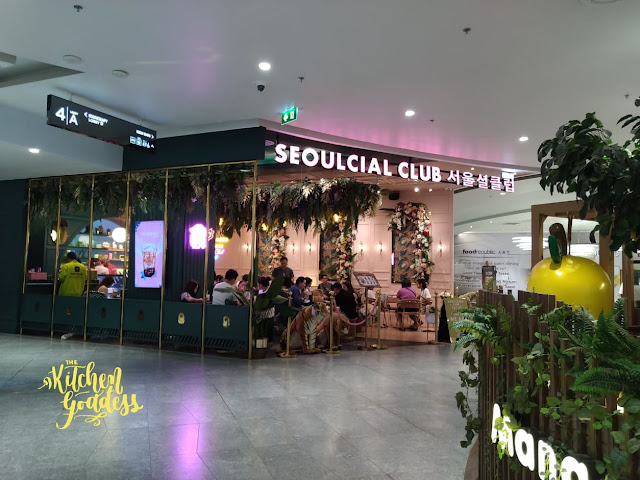 I got The Crown which is Seoulcial Club's top fave milk tea choice. 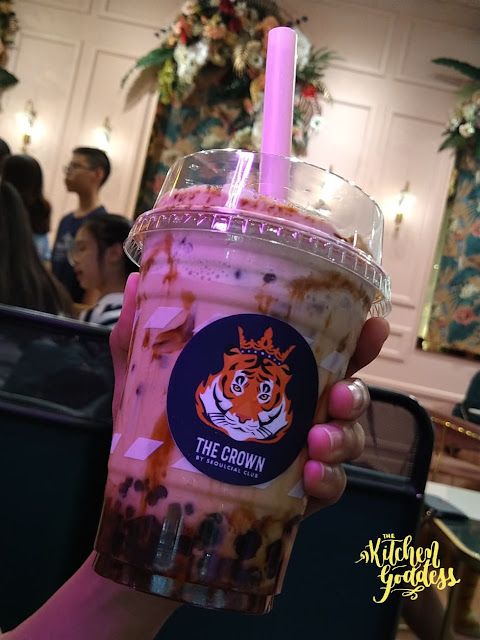 This is me with my friends, Benz and Monlada. Sawasdee kha! Looking forward to more milk tea dates with you guys soon. 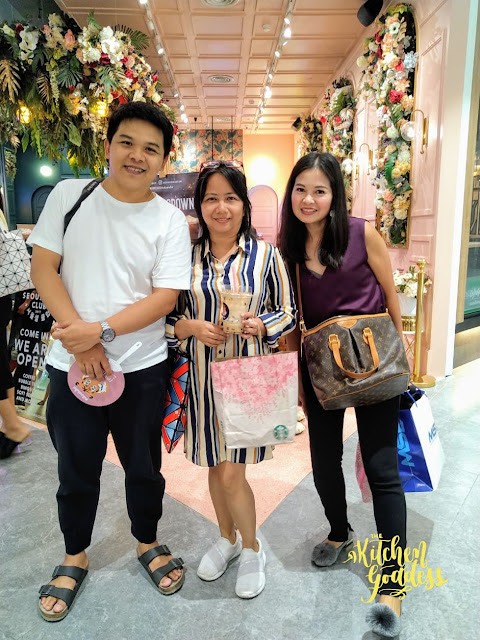 So here's our fave Thai milk tea seller during our recent stay in Bangkok. Her cart is about 3-5 minutes walk from our hotel. 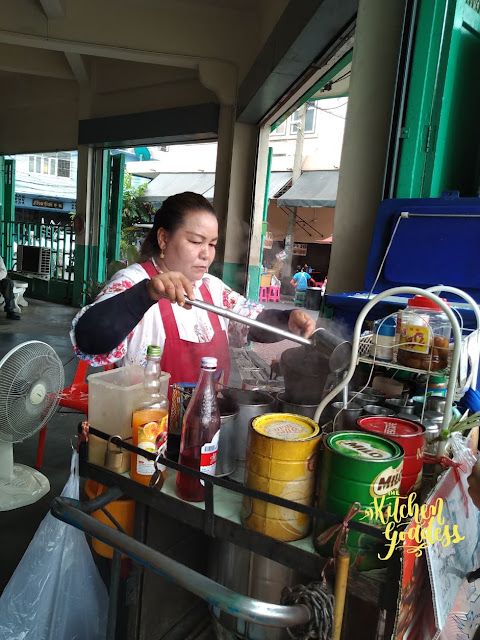 And before flying back home, bought another Thai milk tea drink, Cha Tra Mue (this one is a bit sosyal!) from Central World and cost 40 baht. It includes a reusable milk tea cup. Nice! 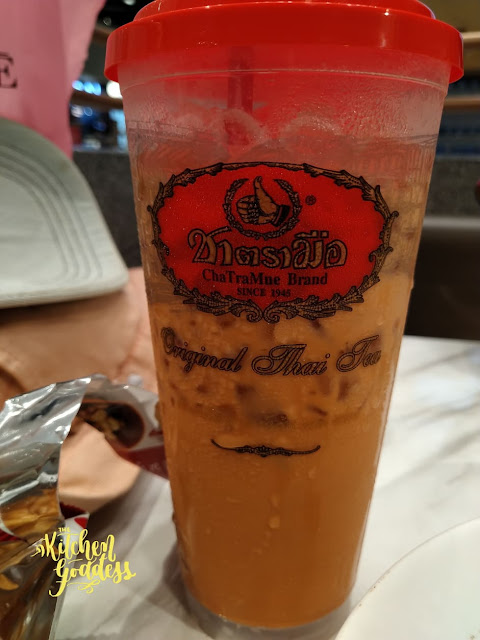 And of course, you can't leave Bangkok without hoarding some Thai milk tea. A pack has 5 sachets and cost 40 baht. 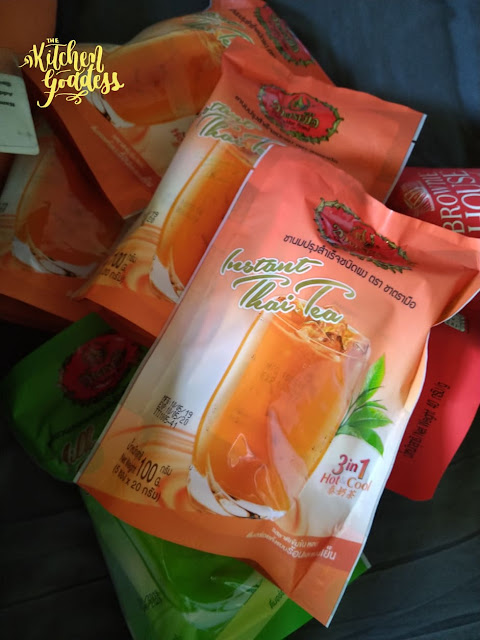 Looking forward to another round of milk tea hopping with my boba-crazed daughter. 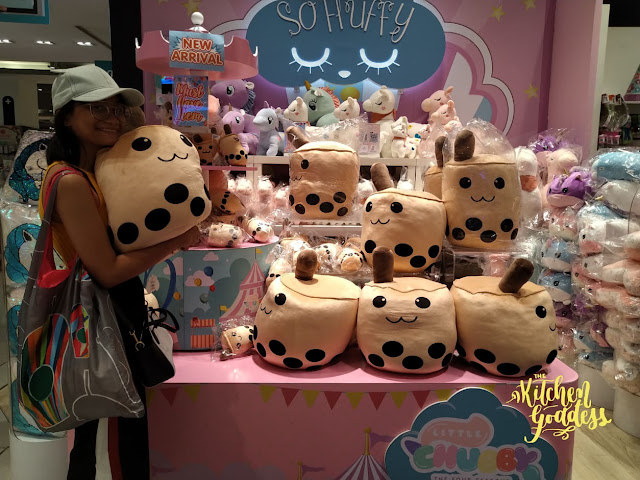