By Edel San January 22, 2013
This is one of the best resto discovery this January (so far).

While cruising President Avenue in BF Paranaque, C spotted Dong Juan, which she excitedly says was originally from Cebu. We would've eaten there but I said that since she already had an idea on what the food tastes like (with happy food memories, too), I sugessted we eat in a "new" restaurant so that we can rave or rant about it later on. Besides, both of us know that BF Paranaque is famous for its numerous restaurants. Initially, I was trying to recall the name of a Japanese resto that I've read in another blog but all I remember was Aguirre Avenue. And we saw the street (avenue) alright but we didn't see any Japanese-looking restaurant and we were already at the park/playground. Or maybe we made a wrong turn somewhere. And because we were famished, we decided to head back to an Italian resto that we saw earlier along President Avenue. Then we saw Dong Juan again and beside it was Sen Lek Thai Noodles. Hmmm ... looks interesting. And with herbs and spices for good health, too! Nah, we're not heath-food buffs. Just your regular foodies. ;) 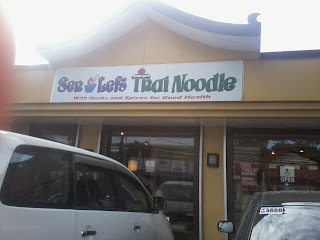 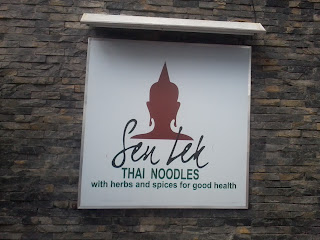 It was already past 2pm when we entered the restaurant so no ones around except us, and the waitresses.  I love the shelf with the Thai decors. The place is very clean also. 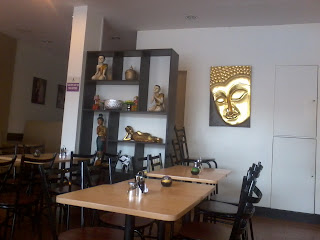 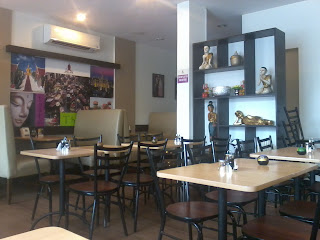 Ordering food, by the way, is done at the counter and you also have to pay first. O-kay. Its canteen-ish, not resto-ish. No problemo. Everything on the menu sounds yummy but we were able to control ourselves from ordering too much. And guess what- we were only P20 short of our forecasted food budget. Nice!

Chicken in Green Curry Sauce, P120. C said its good, with just the right hint of spiciness. Didn't get to try it, though. 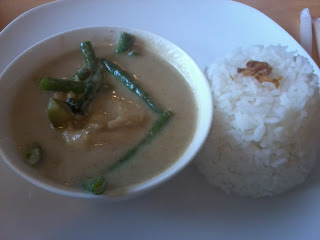 Thai Milk Tea, P50. Better than Soms! Not that sweet and you can actually tastes the tea compared to Soms which has about 150% sugar that you need to ask for tons of ice. But I love Soms Thai Milk Tea, also. Hehehe

Pad Thai, P90. The noodle was al dente which made us exclaim that maybe this is an Italian restaurant after all. But the jokes on us. It-was-so-good-that-we-were-praising-it-with-each-and-every-bite. That good, really. 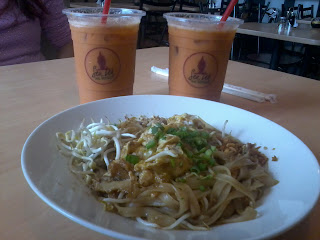 Thai Bagoong Fried Rice, P120. Another winner. The meat was tender and flavorful and has the right serving portion, not "bitin." It's not malansa also (the bagoong). 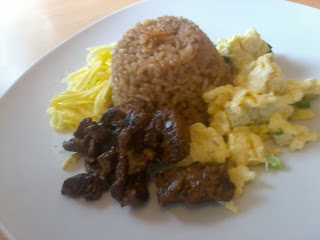 Tod Mun Kung or Shrimp Cakes, P90. I was going to complain that it looks "konti" but then, looks can be deceiving. Its very filling and didn't scrimp on shrimps. And it doesn't look it's made from synthetic shrimps. 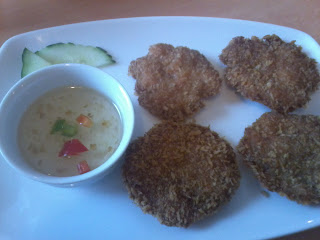 That's the menu on the wall. The waitress was talking to someone on the phone so I'm guessing its either they do deliveries or someone will pick-up some yummy goodies soon. 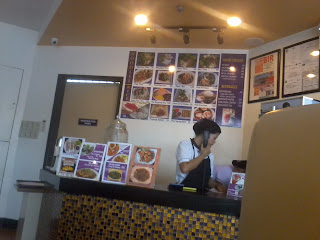 Glad to have discovered this restaurant. It would be nice to come back after a day or two or maybe next week but it's TOO FAR! Thank God for Skyway, though. ;)