By Edel San May 14, 2013
An aunt passed away Sunday night. I was able to be with her yesterday afternoon  although I did not think then that it would be the last time I that I will hold her hand and see her breathing. Please join me in prayer as I offer the Lord's Psalm for her. Thank you. 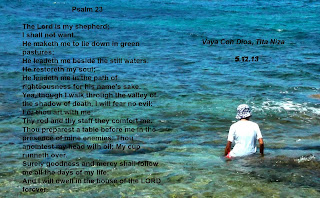 Photo was taken last March 2012 during our trip to Apo Island.

Then this evening (Monday), daughter and I rode a cab to Greenhills. The name of the cab that we hailed was- Vaya Con Dios. I added the Psalm 23 prayer on the photo (above) as soon as we arrive home last Sunday night. I believe she heard me say the prayer for her when I visited her last Sunday, and heard me say it again when I was typing the prayer on the photo. A way of expressing her thanks and letting me know that she is with God now.

By Edel San October 22, 2019
Sharing one of our resto-favorite! We've been dining here for about three years now and as much as I'd like to keep this resto a secret, it's already out in the open about how good the food is at Ooma. Ooma is a Japanese-fusion restaurant so don't expect the usual Japanese dish preparations but be ready for not only a visual feast but a fusion of east and west. For starters, we had this delightful cheesy maki. I believe this is on a limited run on the menu so I really can't recall what it's called. Crunchy and cheesy really, my daughter love this so much.
Post a Comment
Read more

It's National Taco Day and Taco Bell Is Giving Away Free Tacos!

By Edel San October 02, 2019
October 4 is a sacred day for taco-lovers as the world celebrates National Taco Day and of course, Taco Bell Philippines is all set for this event.
Post a Comment
Read more