By Edel San August 29, 2013
Aside from reading, cooking, parenting, (a bit of) shopping, photography, writing, etc., I am also enamored with koreanovelas or kdramas like everybody else. I am a late bloomer when it comes to kdrama but I've been hooked since 2009 after watching: You're Beautiful, You're Handsome which stars Jang Geun Suk. Though I hate to admit it, but I really fell in-love with the characters that when Samsung released the Corby phone, I was the first to get one. :P

Anyways, I just finished a marathon-run of PASTA. This was shown sometime 2010 but it is only now that I got to watch it. I can't remember what excuse I had then for not watching but I'm glad I did now. Also, I feel a special affinity with this kdrama since it the story revolves around chefs, Italian restaurant and cooking. 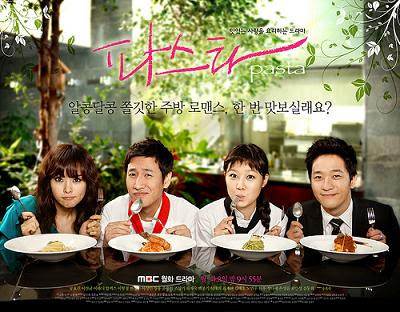 The setting was mainly inside the kitchen so there's a lot of cooking and chopping, etc going on. I can even imagine myself joining the chaotic action in the kitchen- haha. Also, this kdrama will be appreciated by chefs and wannabe chefs or simply anyone who just loves to cook and eat.