A three-man contingent from the Philippines will compete in the World Pastry Cup, Coupe Du Monde de la Pátisserie in Lyons, France. January 25.
Twenty-eight year old Rizalino Mañas, Bryan Dimayuga, 24 and 36 year old Vicente Cahatol, all from Makati Shangri-la, will compete with 20 other teams from different countries worldwide in what is considered as the premier competition in the world of pastry. 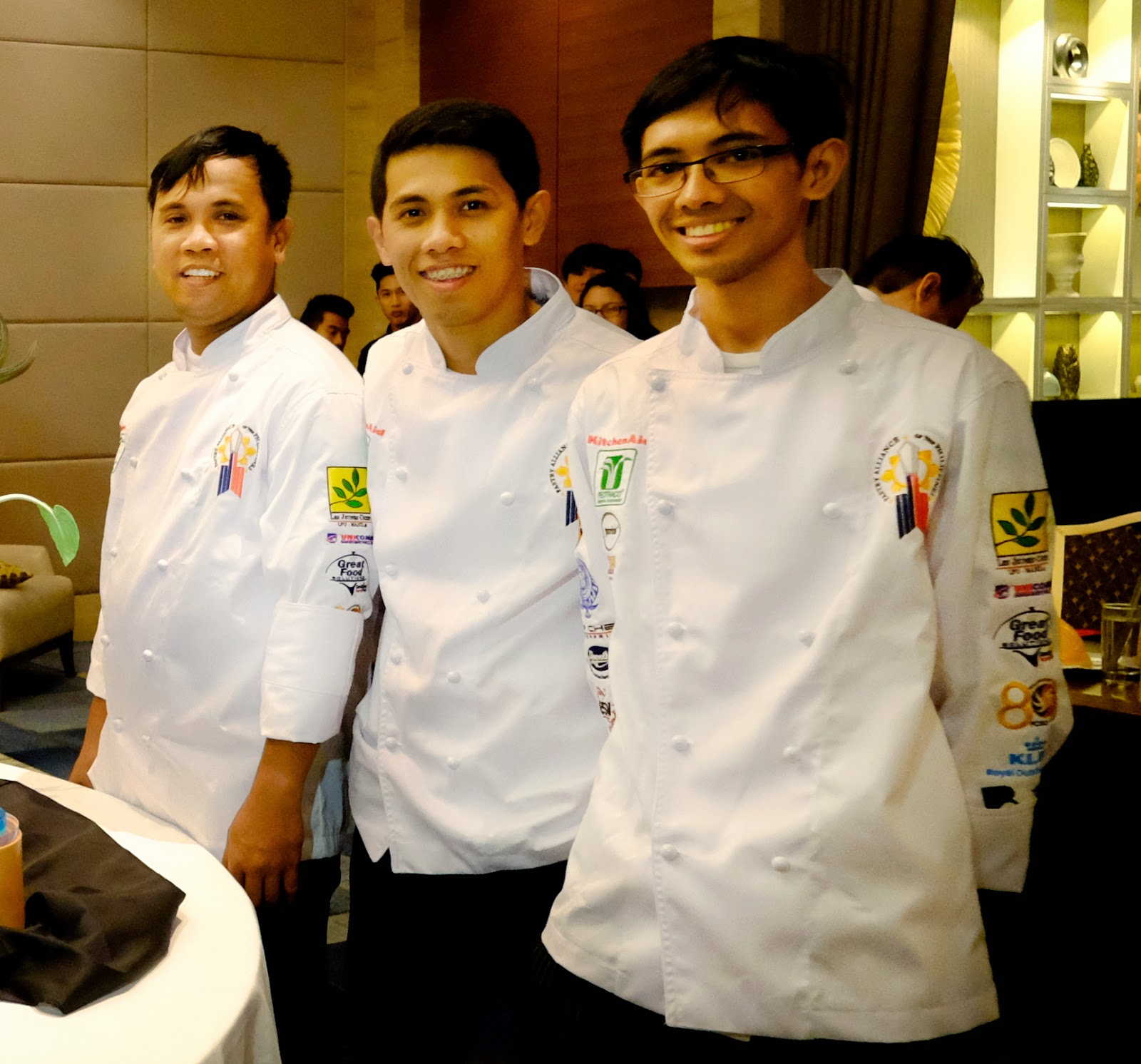 As Gabriel Paillasson, founding president of the Word Pastry Cup has said, “The World Cup will be at the Patisserie what Formula 1 is at the Automobile.”

Renowned pastry chef Buddy Trinidad is part of the official team as juror. Per contest rules, he sits as one of the judges of the competition but cannot participate in evaluating the Philippine team creations.
The World Pastry Cup runs 10 hours long non-stop during which each team is required to create 3 chocolate desserts with great wines using sponsor product Valrhona, 3 frozen fruit desserts using another sponsor product Ravifruit, 12 identical plated desserts, sugar showcase, chocolate showcase, ice carving and ice cream cake.
As if this is not daunting enough, new rules for the 2015 competition requires
each team to carve a block of Valrhona chocolate and integrate this into their chocolate showcase. They need to use 2 ice blocks with identical dimensions for their ice sculpture and their sugar sculpture must be composed of at least 50 per cent sugar and blown sugar.  These new rules were designed to test the competitors’ technical skills.
The team first won in the Philippine Culinary Cup held last 2013.  This qualified them to join the Asian Pastry Cup held in Singapore last April 2014. They won again making the Philippines one of the 5 countries from Asia to compete in the Pastry World Cup.
“Eto na. Lahat na. Wala nang balikan, says the bespectacled Mañas who everyone calls ‘Potpot.’ He has been with Makati Shangri-la since 2011 as Pastry
Commis Chef.
Dimayuga, the youngest in the team remarks, “Basta matayo maayos (ang pyesa), malabas na ok.” He is also a Pasty Commis Chef  in Makati Shangri-la since 2011.
Vicente or Vic hails from Paete, Laguna, home of the country’s foremost sculptors. He feels that he has been carving all his life, starting at the age of 12, influenced by his 2 brothers. Vic can carve anything – ice, chocolate, butter, wood, Styrofoam. He has been with Makati Shangri-la since 2012 as Chief Kitchen Artist.
To make their creations stand out, they will use some local ingredients when they can, like mango and calamansi.
The Pastry Alliance of the Philippine is the driving force behind all these. Its board of directors is composed of the who’s who in the country’s pastry industry. Chef Buddy Trinidad of Park Avenue Desserts is president; Chef James Antolin of Antolin Culinary Consultancy, vice president; Chef Penk Ching of Pastry Bin, COO; Chef Peachy Juban of Shortcrust, corporate secretary; Chef Dan Basilio executive program director from Lyceum of the Philippines Manila, treasurer and Chef Jackie Ang-Po, public relations officer.
According to Chef Buddy Trinidad, “This is the first time in history that the Philippines has qualified to compete in a world culinary competition.”
He is confident that the team can snag a good standing as long as the piece is clean. He also sees the team as equal with those from the other countries in terms of skill, talent and creativity.
What they lack is the means to focus 100 per cent on training and practice. Other countries automatically stop their official participants from working and provide them with stipend so they can practice non-stop. Some teams have been practicing full time for over a year. Our team, on the other hand, still has to report for their day jobs.  To its credit, Makati Shangri-la is generous enough to give them one day official leave every week to practice.
Since its inception in 1989 and through its continuous run every two years, the World Pastry Cup has been dominated by Europeans. France has won the gold 7 times while Spain, Italy and Belgium won one time each with the US winning once and Japan winning twice. No Southeast Asian country has won.
It takes 3 years to get to the World Pastry Cup. It is only held every 2 years.  A team must first win the Philippine round. It then competes in the Asian cycle the next year. The winners here can then join the World Cup happening the following year.
“After 10 years of trying, we’re on our way,” says mentor Chef James Antolin. I don’t know when this will happen again.”
Noted cake designer Penk Ching adds, “This is all for the country.”
The team is thankful to corporate and individual donors. They are, however, still trying to raise more funds this close to the competition date.
Everyone is keeping his fingers crossed that the Philippine team, will at the very least, shine in Lyon.  Even without government support, everyone involved is doing this to make the Philippines proud.
We wish them all the best!

I've had the chance to meet some of the award-winning Pastry Chefs from Makati Shangri-La a few years back and was able to taste some of their sweet creations such as the cake on the photo below which was made from Belgian chocolates and other yummy ingredients. 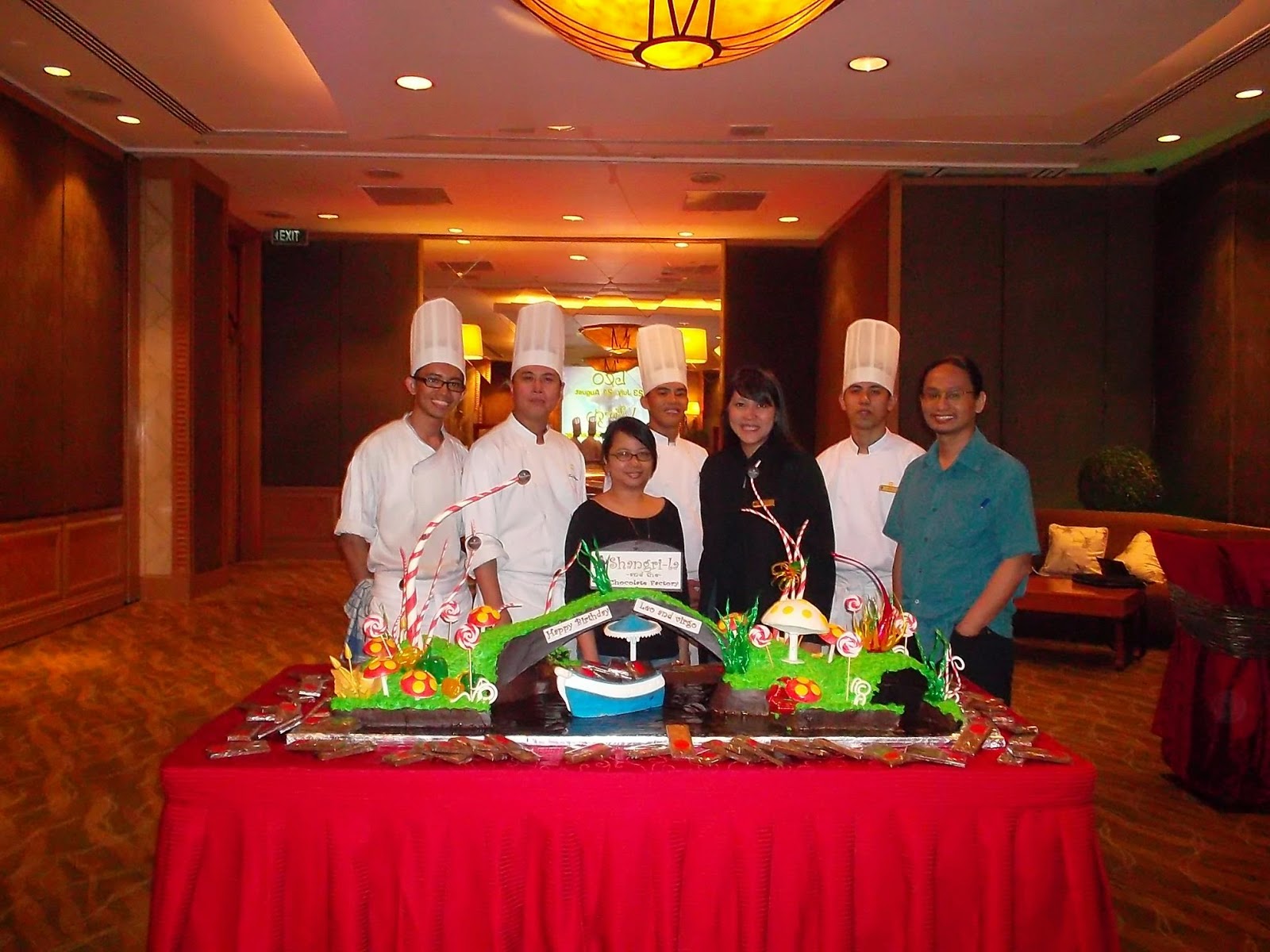