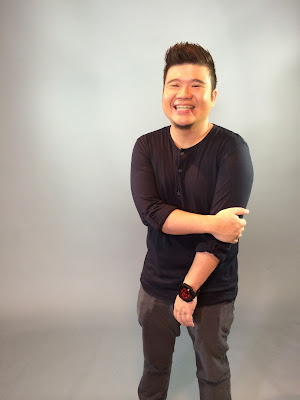 Students and guests get to watch him prepare his dishes and taste each one after the demo.
Chef Sharwin admits to being fascinated with cooking as early as 6-years old. He, however, only cooked his first-ever dish at 14 and, you guess it, it’s bacon wrapped cheese. He went to the Pacific Institute of Culinary Arts in Vancouver, Canada to finally make real his culinary dream.
He became a personal chef, joined and won The Clash of the Toquen Ones and became the chef and host of Curiosity Got the Chef, the Philippines’s Lifestyle Network’s first locally produced cooking show. It is now on its 5th season and is now shown in the United States, Canada, Singapore and Australia. It airs locally on the Lifestyle Network at 9:30pm every Thursday with a replay on Saturday at 8:30am.
Chef Sharwin has also added cookbook author to his list of accomplishments. Curiosity Got the Chef: The Cookbook, a glossy, full-colored book, containing 35 recipes from Season 1.
Chef Sharwin has worked for the Embassy of Canada, The Tower Club in Makati and has been guest chef for Discovery Shores, Boracay; Holiday Inn, Makati; Sheraton Abu Dhabi in the United Arab Emirates and at Swisssotel, Moscow.
For more information on this and on other courses offerings, log on to www.themayakitchen.com  e-mailcontactus@themayakitchen.com  or visit The Maya Kitchen Culinary Center every Tuesday to Saturday at 8F  Liberty Building, 835 A. Arnaiz Avenue (Pasay Road), Makati City or call 8921185 / 892-5011 local 108 / Mobile No. +63947 835 2290.  Call and reserve a slot now!