Conveniently located in Mendiola, Manila, Barcelo Cafe is the Culinary Kitchen of La Consolacion College. This is where the future chefs learn their trade. On most days, especially when there's regular classes (between June to March), Barcelo Cafe is brimming with people. Mostly students and faculty members of the school dine there, then there's the Malacanan employees and other students from nearby schools. The resto has a homey feel about it and the waiters are nice. Also, this is the place where one can eat without being too guilty on the allowance. A meal costs P90, drinks at P30. How cool is that? 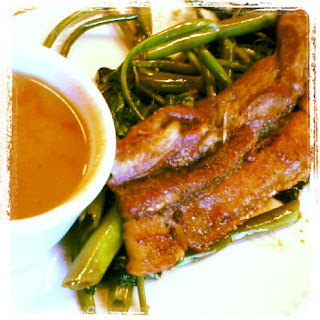 Lechon Kawali. A big slice of liempo fried to perfection served with adobong kangkong. Uhhmmm, not that crunchy for me but tasted delish nonetheless. 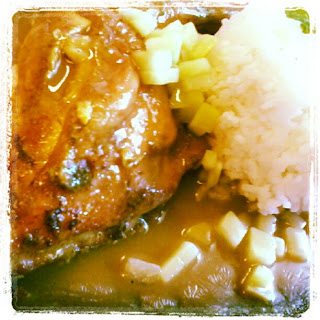 Spanish Chicken. Don't ask why its called Spanish Chicken. I would've thought its a Filipino Chicken. This is a sizzling dish with some minced sayote with a generous gravy. I mean, swimming in gravy. Tastes good and tender. My daughter enjoyed this dish.