By Edel San May 26, 2013
Yesterday, after some "I will watch," "I will not watch," conversation with myself, I finally gave in and watched The King and I with daughter at the Newport Performing Arts Theatre. Actually, daughter already watched it last year with her cousins. But since we were really meant to go to RWM because daughter wanted to attend the 2013 TOYCON Launch, so why not. And another thing (the best part), the tickets are free--- a special treat from Momsie. Thank you, Momsie !!! 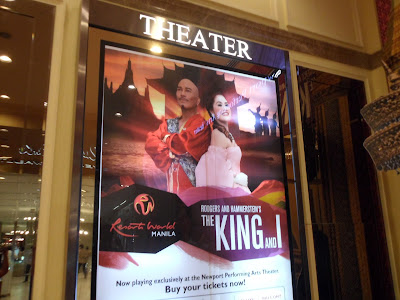 (above photo was taken last year with Ms. Monique Wilson as Mrs. Anna and Mr. Leo Valdez as the King)

So, here's the kwento:

Years ago when I am still a kid (still a kid-at-heart, though), my father used to work for one of the top companies that manages cinemas in Manila. So I get to watch a lot of movies, free movies. Also, we have a movie projector and I remember watching The King and I here at home. Hmmm ... I'm not sure if we ate popcorn. But anyways, it is a favorite family film. And between Sound of Music, and this, I prefer The King and I. And I love Yul Brynner.


Then we watched King and I. And then I cried. More like, I sniffed sniffed most part of the play. And I love the death scene even if it made me cry (real tears this time).

So if you want to watch the King and I, and I highly recommend that you do, you can still catch it at the Newport Performing Arts Theatre until May 31st this year.

We attended the matinee show and it was Bo Cerrudo and Shiela Valderrama who performed as the King and Mrs. Anna. It was a great performance coming from each and every actor's (actress) heart. Even the child actors and actresses gave it their best. And I love the cute little prince eating a banana! Hahaha. And the elephant, too.

Kids as young as 3 years old can also watch the play. A family with a little girl and a little boy was seated beside daughter yesterday. However, they didn't return after the intermission. Only the mother came back to finish the show. The whole show lasted for about two hours and a half so I guess its not advisable to bring in small kids. Besides, this play is very different from The Sound of Music which can really be enjoyed by young children. Luckily, Cinderella will also be staged at the Newport Performing Arts Theatre beginning October this year so kids and adults can both enjoy the show.

Here's the link to RWM's The King and I for show schedule and ticket prices.


Here's a photo of daughter and I posing in front of the King Leo Valdez, taken last year before daughter watched the show with her cousins. The elephant photo was from last year also. 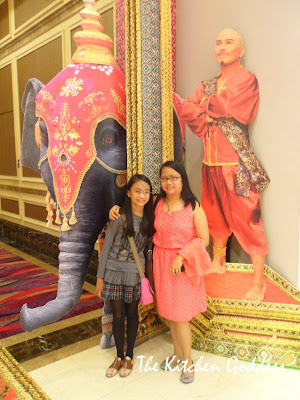 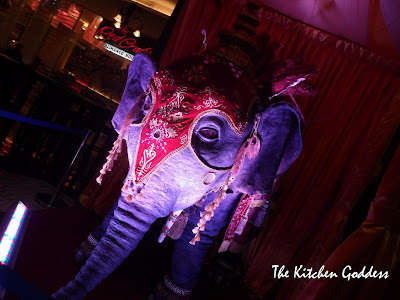 Joke time muna ---
While eating lunch today, hubby and I were discussing The King and I.