By Edel San January 03, 2014
I love unplanned trips because there's happiness in discovering not only a lot of interesting places but food and restaurant as well.

Our first stop was in Baguio. We arrived there around 9pm of December 27 and was lucky enough to secure a table at O' Mai Khan along Session Road (near Narda's). The restaurant was quite full and a bit hard to go there because of the traffic.

The kids had chicken barbeque. Didn't get to taste this though because I've had my fill of chicken already and I might grow wings anytime soon. But based on the kids happy faces, I guess the chicken barbeque rocks! 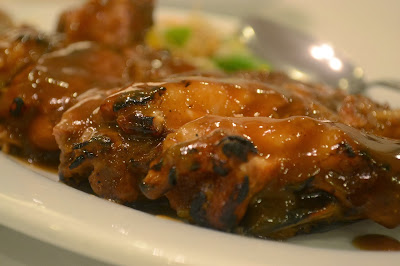 Tempura. Another order for the kids. I skipped this delicious tempura because I've already tasted it before. It doesn't look tempura-ish by the way- more like camaron. :) 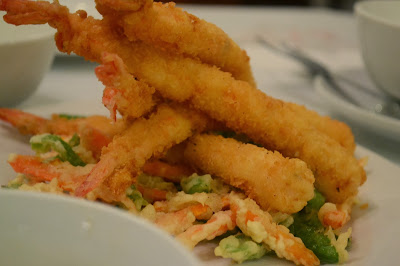 Beef Bulgogi. This is what I ordered. Very flavorful except that there's too much sauce and its a bit on the sweet side. I should've requested the server to separate the sauce. Next time. ;)  I also like to commend the staff at O' Mai Khan for being nice and accommodating since we arrived late and they waited for us to finish our dinner, still with happy and smiling faces. 2 thumbs up! 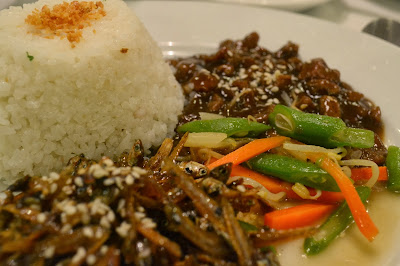 Breakfast was spent at home (we stayed at a friend's house somewhere in Brentwood area). We had spam and fried rice, and krispy kreme donuts, and hot chocolate (perfect for the cool Baguio climate). And we also had taho afterwards.

This is a new restaurant discovery along Session Road. Actually, we always go to La Azotea Bldg. along Session Road because of the gallery and the vegetarian resto there. But this time around, it was daughter who requested to try Jim's Retro Diner which happens to be at the basement. And I'm glad she convinced me. 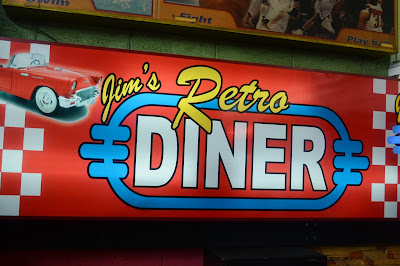 It was way past lunchtime when we arrived at the restaurant so there's no one around except the servers. We had a bit of problem choosing what to eat because the choices are just plenty- not to mention very friendly on the pocket. Another plus factor (especially for daughter) is that they have WIFI. Yey! 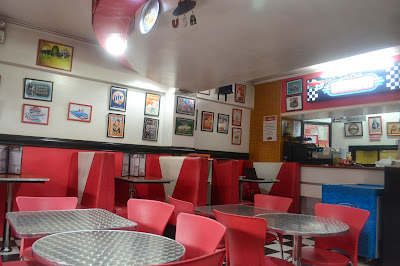 Fried Chicken Meal, P90. Meal includes a glass of iced-tea. Daughter had this. Says, its good. 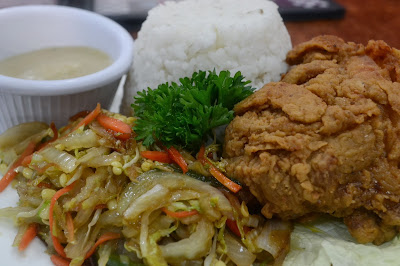 Lechon Kawali Meal, P80. I just love lechon kawali. Skin is very crunchy. The vegetable sidings are just okay. I'd like to order this again soon. 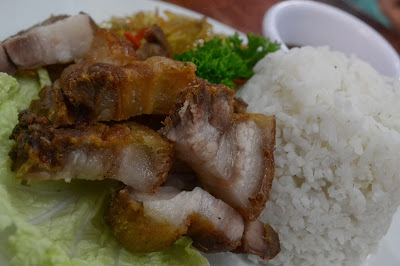 So after having our lunch, we took a cab back to the house and rested till the sunset then we're off to Session Road again. Daughter was feeling hungry and wants to eat burger at Jim's Retro Diner but I convinced her to try the beef mami at 456 Restaurant still along Session Road but almost at the downtown part.

456 Restaurant is the typical carinderia-type except that its quite big and full when we arrived. There's also a bakery there. We bought the cinnamon loaf (P28) but forgot to take photos. The resto are full of travellers-on-a-budget. A mixture of old and young people swathed in layers and layers of clothing. It was pretty cold that night (December 28).

So I ordered a bowl of hot beef mami for us. Costs P55 only. Wow! Beef and broth tasted flavorful but I've tasted better noodles. But then again, for its price, I think its okay. I'm just not sure why the color of the beef is darker than the other beef mamis I've tried. Okay, I don't really wanna know. ;) 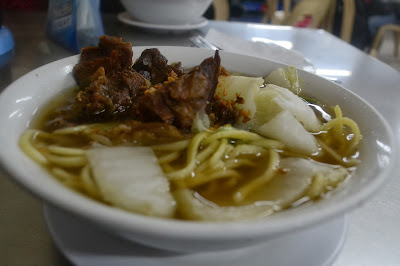 Had a nice stroll up and down Session Road. We wanted to eat corn but the beef mami was quite filling. We ended up checking the night ukay near Burnham Park. Alas, place was really, really crowded. It feels as if all of Manila's inhabitants are in Baguio that time. Decided to head back to the diner so that daughter can satisfy her burger craving.

The burger (sans cheese) costs P58 including some potato chips (crisps). We paired it with iced-tea (P40). Good thing I didn't order anything for myself because the burger was a bit huge. Daughter and I happily divided it into two and shared the iced-tea. Burger tastes just okay, I wouldn't recommend this though especially for those used to eating really beefy tasting burgers. You know what I mean. But the overall dining experience was very good. The diner filled up with tourists by the time we left and that's almost 12mn. 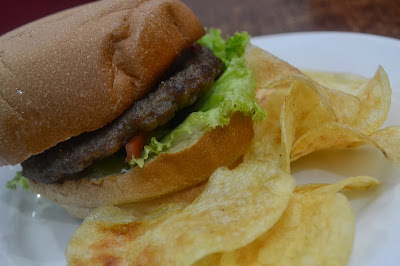